Learn more about our recommendations for growing the domestic industry below, or click here to download the full report.

Canada has the potential to develop itself as an automotive superpower on the world stage. Expanded production capacity in vehicle assembly and parts production can fuel growth in creating good union jobs, expanding workers’ skills as well as securing investments in technological advancements and innovations. More than that, Canada can strategically position itself as a global leader at every stage of the supply chain. This leadership includes capitalizing on internal combustion engine (ICE) vehicles that still dominate the market as well as rapidly rising alternative propulsion zero emission vehicles (ZEV) – from the mining and refining of critical minerals, of which Canada maintains significant stores, all the way through to recycling. From an economic development perspective, Canada is the envy of the world. 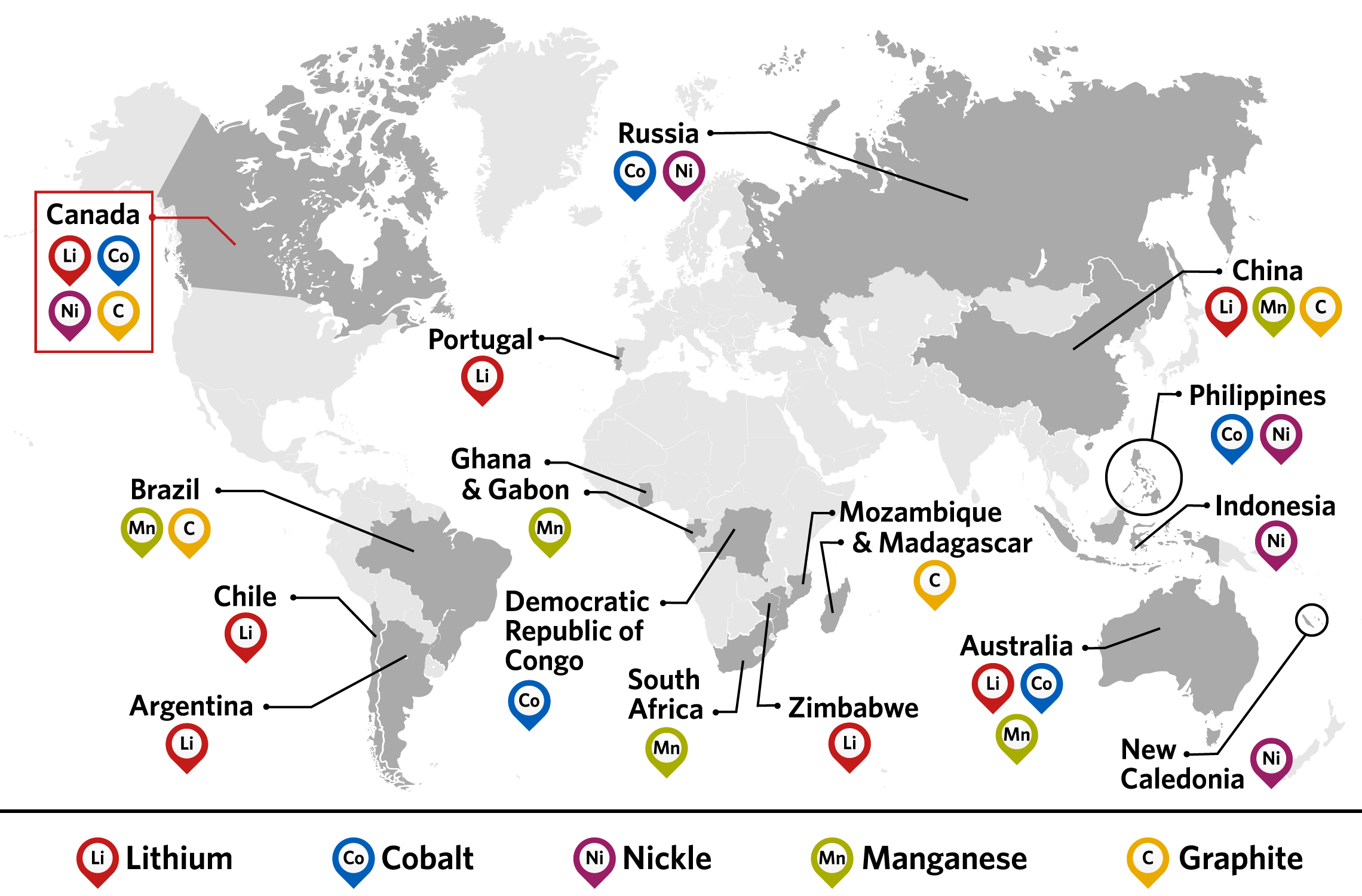 However, this expansion, and the economic benefits that go along with it, will not come to Canada by chance. Governments cannot simply cheerlead their way to product commitments, industrial expansion efforts and job creation by blaring the ideological trumpets of “low taxes” and “flexible labour standards.” Instead, countries the world over, such as the United States, China, Germany, France, Japan, Korea, Brazil and others, approach auto sector development as a strategic priority by using a range of trade, investment and economic oversight tools to achieve broader national objectives in areas of job creation or decarbonization.

Canada’s federal and provincial governments clearly understand the strategic potential of auto sector growth. Investment attraction tools, particularly the federal Strategic Innovation Fund and its associated Net Zero Accelerator Fund, are proving effective. For instance, SIF monies, that were matched dollar-for-dollar by the Ontario government helped leverage nearly $2 billion for retooling Ford’s Oakville Assembly Plant as well as financial supports for GM plants in Oshawa and Ingersoll as well as Stellantis facilities in Windsor and Brampton. The bulk of these commitments were negotiated in conjunction with Unifor-Detroit 3 collective bargaining in 2020.23 Additionally, governments continue to assign internal resources to lead strategy tables, stakeholder dialogue and other initiatives to better understand and activate this shift. 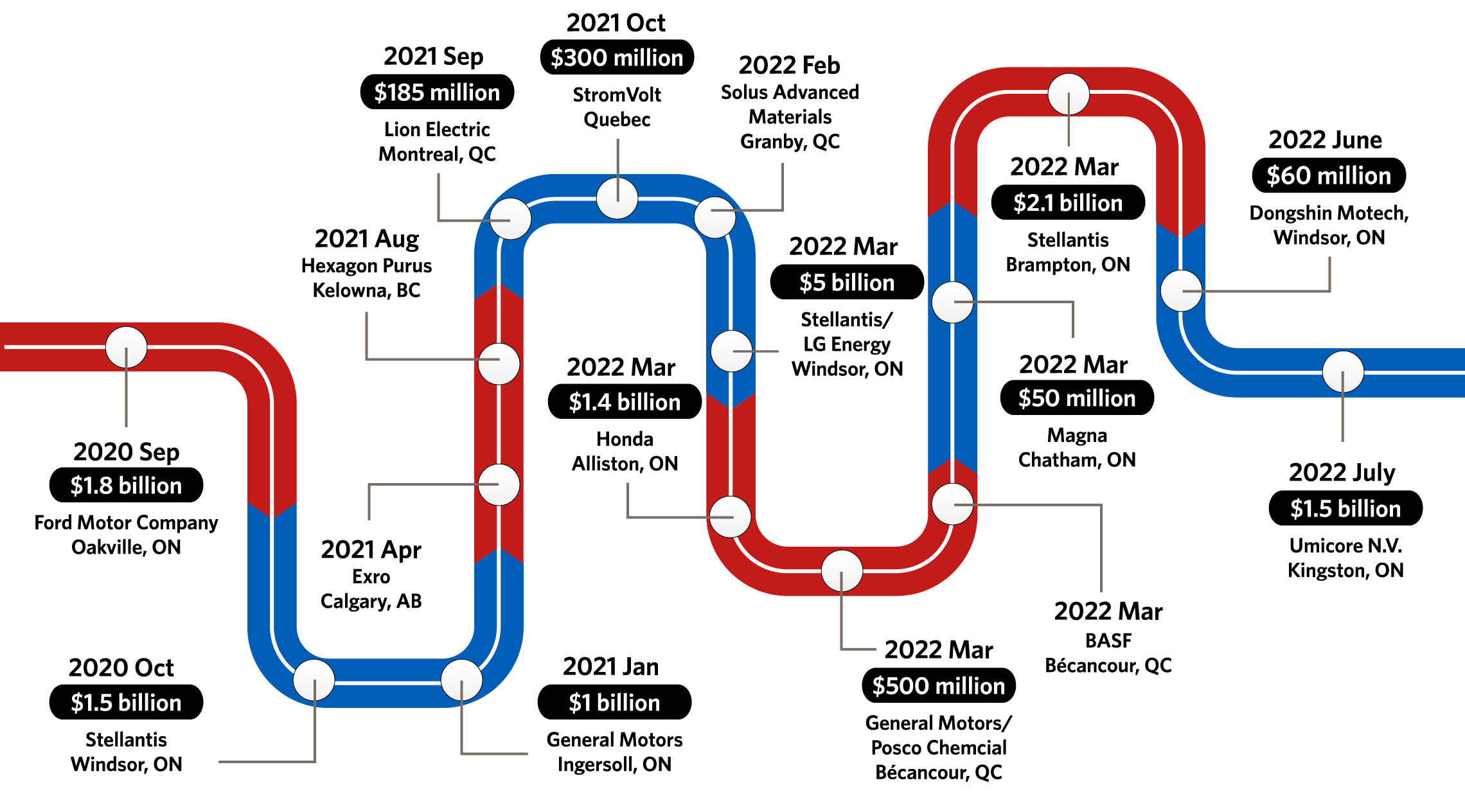 However, solidifying and growing the auto sector and its associated supply chain requires more than subsidy commitments. It also requires a more cohesive whole-of-government approach to sector development, underpinned by a comprehensive and goal-oriented industrial strategy.

However, new vehicle assembly programs are not the only measure of auto sector success. The opportunities for Canada today require a “whole-of-supply chain” assessment of the industry’s growth potential. This value-chain strategy includes major investments in needed upstream component parts production, including those related to future electric vehicle (EV) production, such as battery cells and related modules5, electric powertrain and drivetrain systems, power electronics, thermal heating systems and others.

Connected with this value-chain approach, Canada must expand its capacity in mining and refining critical minerals needed to feed the broader industry, including lightweight metals and battery grade precursor materials. In fact, Canada is the only country in the world with significant mineral deposits needed for advanced battery production, including nickel, graphite, lithium and cobalt. Recognizing the strategic importance of this upstream development to the Canadian auto sector’s growth will provide Canada a unique advantage and a foundation upon which an industrial strategy can be built. Canadian officials must not squander this advantage by allowing the export of raw materials for refining and upgrading outside of Canada.

As purchasers of goods and services, governments certainly have a role to play in supporting and growing domestic industries. Altogether, federal, provincial and municipal governments as well as government-run agencies, procure approximately $200 billion each year. If used strategically, this procurement would act as a sizeable amount of economic stimulus that can bolster industrial development, incubate new technologies and innovations and create jobs.17 To accomplish these goals, government agencies programmed to seek out lowest-cost suppliers must recalibrate their thinking and look more broadly at the value of contracts to the domestic economy.

In recent years, Canada committed to lowering emissions through its vehicle fleet. In 2016, at a tri-nation summit, Canada, Mexico and the United States agreed to deploy more ZEVs across government-run agencies.18 Canada is also a signatory to the 2016 Government Fleet Declaration that commits to accelerating low-emission and electric vehicles into the fleet mix and encourage other provincial and municipal governments to do the same.19 Following this commitment, the federal government announced its intent to ensure ZEVs or hybrids comprise 100 per cent of all new light-duty administrative fleet purchases by 2030.20 21 Natural Resource Canada operationalizes this fleet commitment through its Greening Government Fleet guideline released in 2018.

Despite this noble effort, the government’s approach is not coordinated with Canada’s industrial development objectives.

In fairness, at the time in which Canada first made these commitments there were few, if any, Canadian-made products available to meet the government’s demand. Only some Plug-in Hybrid Electric Vehicle (PHEV) models, including the Windsor-built Chrysler Pacifica, were viable options, a fact that on its own should have sent alarm bells ringing throughout the halls of government.

Thankfully, the landscape is beginning to change. Production of EVs is coming to Canada with investments in GM Ingersoll, Stellantis’ Windsor Assembly Plant and Ford Oakville in the near future.

Further, it is the government’s own stated objective to advance and expand this industrial footprint of EV and battery production domestically. However, government procurement policy and the ambitions of fleet emissions reduction must compliment Canada’s industrial policy. Public dollars must support domestic investment wherever possible.

Part of what makes Canada’s automotive sector such a lucrative part of the industrial landscape is its significant contribution to research, development and innovation. Canada has become a global hub for engineers, developers and innovators as well as a leader in ground-breaking advances in electric vehicle technology, battery development, lightweight materials, secure communications and artificial intelligence.

The Canadian Automobility Hub23 in Windsor, Ontario is the latest innovation project funded in part through an array of federal and provincial support programs. These programs aim to solidify Canada as a global automotive technology “accelerator,” attracting teams of engineers, designers and developers to support and commercialize new technologies. Ontario is not alone. Quebec is also home to a burgeoning battery supply chain and is home to the country’s largest automotive testing and research centre funded through Transport Canada.24 Domestic auto- and parts-makers also engage in direct research, development and testing at various facilities across the country, including Stellantis’ Automotive Research and Development Centre in Windsor, Ford’s Research and Engineering Centre in Ottawa25 and General Motos’ autonomous vehicle test track in Oshawa.26

While encouraging, more research and development support on its own will not fix Canada’s automotive challenges. Global companies often take advanced technologies and put them to work in low-cost foreign jurisdictions. Assisting Canadian-based companies to upgrade their technical and engineering capacities and develop and produce new products can generate some clear economic benefits here at home.

24 The Quebec test facility is operated by PMG Technologies for Transport Canada: http://www.pmgtest.com/about-us

Next: Managing the transition to net zero